News:
What was once called “Easter “ is now CHARIS CAMPMEETINGNew SAINTS COMMUNITY IN SONGS 4Now Available on Amazon PaperbackOut this September GOD’S WORD IN A PANDEMICThis October 2020…get these books
Living Word Media News Review THE GREATER GLORY - Another review.
7

THE GREATER GLORY – Another review.

“The terminology of glory provides a window on virtually the whole of Paul’s theology ( the noun “doxa” occurs 76 times, the verb “doxazo”, 12 times, predominantly in Romans and the Corinthian letters). Nowhere in the New Testament are its Old Testament roots more apparent than in Paul’s usage.” – (Dictionary of Paul and His Letters, Hawthorne and Martin, the entry on “Glory”.)

I have deliberately cited the source mentioned above to indicate the significance and observe the methodology employed by the author Pastor Chris Onayinka in one of his recent works titled: “The Greater Glory”. The book is a hermeneutical word study of the Hebrew term “Kabod” and its corresponding Greek “Doxa” within the definite Christocentric parameters of the Work of Jesus,
prophesied by the ancient prophets, fulfilled in the Fulness of time, in His crucifixion, death, and resurrection, the source of the believer’s regeneration, the giving of the Spirit and the inauguration of His Body, the Church, the permanent abode of the Godhead individually and corporately.

As is his custom, the author establishes the basis of his hermeneutic which is employed throughout the work. Essentially, Jesus Christ is the fulfillment of the Scripture documented by the Old Testament prophets, once exegetically uncovered, or interpreted we arrive at the announcement of what God wrought in Him as contained in the writings of the Apostles. Revelation emphatically focuses on Christ and His Work and is complete and finalized in the New Testament epistles. This is to be taken into careful consideration when dealing with typology and figures of speech which Moses employs in his writings, lest grave error ensues

The author commences the study on Glory by examining the request of Moses to “see” the glory of God. This longing in the prophet’s heart to see God in the human form beyond the visions to which he was accustomed, is an intimation of the Incarnation and the resulting work of Salvation, which God clarified would happen at a later period beyond Moses’ lifetime. However, the plans and pursuits which would be wrought in Christ were given in prefigurative representation.

Under the heading, “The Glory To Us”, Jesus and the role of signs, wonders, and miracles are examined in synch with those operated by Moses as explained by the author of the letter to the Hebrews (chapters 3 and 4). Our Lord’s miracles compassionately reveal the True Nature of God, dispelling erroneous distortions rampant in the religious traditions of Israel in Christ’s day that supposed God to be the author of sickness and infirmity. This chapter is replete with passages of Christ’s miracles and their explanations, However as the author notes, the Gospel is in no wise subservient to miracles, but miracles are introductory to the Gospel. The chief end of miracles is to indicate men to the event of the crucifixion, death, and resurrection in its salvific import. Regeneration, that is, the New Birth has its source in Christ’s resurrection. The author diligently explains this from the teachings of Jesus, the Apostles in Acts and particularly Paul with an exegesis of several passages.

“The Glory In Us”, presents the former house as the prefiguration of the latter according to the prophecies of Haggai. The Tabernacle of Moses with its later modifications in Israel’s history, along with the tangible glory accompanying it all pointed to God Indwelling the believer by the Spirit as the incorruptible promise of Life, the Greater Glory fulfilled upon the resurrection of Jesus from death. The chapter further delves into the Pneumatological term of “Spirit upon” as it relates to supernatural utterances spoken under the Spirit’s influence.

“The Glory Among Us”, overlaps from implications of the previous chapter by presenting a Charismatic Ecclesiology. The gathering of the Saints in whom God dwells by His Spirit can individually and corporately operate the endowments His Indwelling graciously provides. Each believer must not be inexperienced in the activities of the Spirit. As he skillfully presented in the book: “The Charismatic Ministry” the author goes through the 12th chapter of 1st Corinthians with explanations concerning the “Spirituals”.

“The Glory For Us” beautifully presents the future hope reserved for the Sons of God, namely the resurrection of the body and the complete reversal of corruption to which the human race has been subjected by sin. Romans the 8th chapter is explained in context to deliver the intended meaning of the often misquoted phrase “manifestation of the Sons of God”, and our reception of the Spirit is presented as the earnest of our future glorified state.

The final chapter “Walking In The Glory”, presents practical imperatives for each believer and the Church corporately. The preaching and teaching responsibilities of bringing others to faith in Christ and spiritual growth is a task meant for all, and not the duty of a few. The priority of Prayer in the Spirit, and “being filled”, the importance of believers’ meetings to experience, experiment and participate in the activities of the Spirit, not treating utterances with contempt, learning to rejoice and properly respond to the Spirit are certainly highlights set forth according to the Immutable plan for building strong local churches on the Integrity of the Word of God and the moving of the Holy Spirit.

Personally, I was stirred to prayer while reading this text, thankful that many men and women would read these pages and contend for the “Greater Glory”. I am grateful to God for the ministry of Pastor Chris Onayinka and the host of men and women arising in this time to minister Christ in His Glory as the exclusive focus of Ministry. This book joins the growing list of recommended reading produced by the author, I count it an honour to have reviewed it, we can only rejoice in the Lord in anticipation of the clarity and accuracy the Spirit is bringing to the body of Christ as we take bolder strides to walk in the “Greater Glory”.

Available in all Saints Community churches 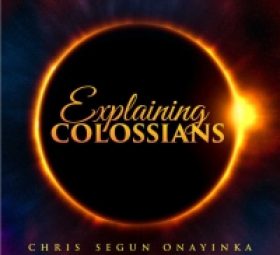 New on Livingwordmedia! SO GREAT SALVATION Series 6A and BIBLE STUDY- What the Spirit DoesMarch 19, 2019